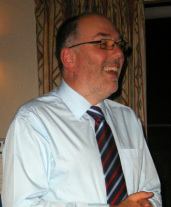 Alan trained at the Royal Academy of Music, London where he gained the GRSM (Hons) degree and the LRAM and ARCO diplomas. He was the recipient of the CH Trevor Prize, the Frederick Keene Prize for Organ and the Peter Latham Prize for Musicology.

As an organist, Alan has held various posts, including that of Organist and Master of the Choristers at the Episcopal Cathedral in Perth, Scotland, Perth City Organist and is currently Director of Music at St Mary’s Church, Hitchin.

Alan spent many years as a Preparatory School Director of Music and is now employed as a Visiting Music Instructor at St Paul's Cathedral School in London. He is also a visiting organ teacher at Bedford School, and an Examiner (Diploma and Grade) and Trainer for the Associated Board of the Royal Schools of Music.